I found this shirt at the mall. I kind of wish I could wear it on the Skype call to encourage my girl to want to be adopted.

aha moment, noun, a moment of sudden insight or realization at which something becomes clear

But I don’t think the translator would appreciate my attempt at humor and my girl doesn’t know enough English to understand the irony.

It’s been rather warm lately (mid 80’s) and my cat is miserable. Here he is plastered against the wall trying to find just a tiny piece of cool floor or wall to give him some relief. Silly cat… 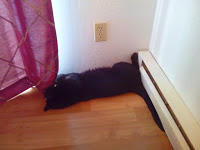 Someone at church was handing out tomato plants earlier this year. I feel bad that I pretty much killed mine. I think it’s because I don’t have a garden to plant it in and my patio doesn’t get enough sunlight. I thought the plant was completely dead when one day it sprouted tiny tomatoes. I waited for them to get a bit bigger. Because I have no idea what type of tomatoes these are supposed to be, I don’t know how big they were supposed to get or if they were supposed to turn red. But they easily came off the vine today so I ate them. The two tiny ones weren’t ripe yet but the biggest one tasted great! 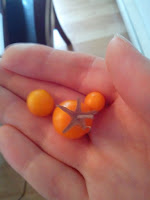 Now I want to grow tomato plants so that I can eat my own tomatoes. It was highly satisfying to eat these three tiny tomatoes, even though it’s the only produce I grew this year. I do hope to cultivate a garden someday.

Anyways, just a few of the tiny things I’ve been up to lately. Nothing insightful, just day to day life!

3 Thoughts on “A few random thoughts”

This site uses Akismet to reduce spam. Learn how your comment data is processed.