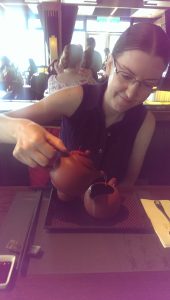 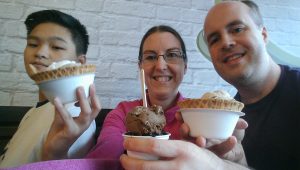 I cannot believe how much of a difference seven pounds makes. When we left for Taiwan, I weighed about 120 and felt relatively fit and slender. Today I weigh 127 pounds and feel decidedly fat. My jeans barely fit, my tummy is flabby, and I get winded easily. I’ve lost the definition in my face and I’m starting to grow a second chin. Frankly, I feel disgusting. Last night I was looking at pictures from when I was my heaviest weight (187 pounds) and I do not want to look and feel like that again.

Why did I let myself get out of shape? That’s easy enough to answer – stress. Our lives have been turned upside down these past eleven months. The easiest way to make yourself feel better is comfort food. So I’ve been indulging. A lot. And our lives are so hectic that I’ve not carved out time for exercise.

It’s time for a change. Life is still crazy. My daughter’s mood and behavior are still very unpredictable. But I have to be healthy in order to help her. I have to feel good about myself to help her feel more confident in herself. So here are my goals.

Drink water. Specifically, I’m aiming to finish two water bottles per day. Right now I’m barely drinking half of my water bottle. That means I am chronically dehydrated. Ideally, I should be drinking three, but two is a reasonable goal for right now.

Exercise. I want to run a race again. Jeff and I haven’t run a race in five years. I want to register for a 5k in September. My daughter has agreed to run with me if I walk and run, rather than run the entire thing. I agreed to that compromise, but I’m going to register for a second race that I can run in its entirety. I have a love hate relationship with running, but I adore the races. Getting out there with a crowd of runners is exhilirating. I want to experience that again.

Food. I have no hope that our menu will change. My daughter is a picky eater and I don’t have much time for menu planning. Plus, since she still has regular rages and meltdowns, I cannot prepare complicated meals. I need simplicity. So I’m not going to change our menu. However, I will change how much I eat. I do NOT need to finish everything on my plate. And if I’m going back for seconds, it needs to be watermelon or an apple or cucumber or something healthy and much more calorie friendly.

I think these are reasonable goals, even in the thick of our crazy life.

The gods are angry.

Volcanic eruptions, sinkholes, ground shakers–everything points to their unhappiness. At least that is what the king of Armania believes. His son, Prince Wilek, thinks his father’s superstitions are nonsense, though he remains the ever dutiful heir apparent to the throne.

When a messenger arrives and claims that the town of Farway has been swallowed by the earth, the king sends Wilek to investigate. But what Wilek discovers is more cataclysmic than one lost city. Even as the ground shifts beneath his feet, Wilek sets out on a desperate journey to save his people and his world. But can he do it before the entire land crumbles?

I am really not sure how to review this book. Overall, I was extremely frustrated. But as I outlined my complaints to my husband, he told me that everything I am describing is normal for the fantasy genre. As I rarely read fantasy, I’m not used to these particular characteristics.

1 – The plot is massive. There are many events going on at the same time and it was difficult to keep everything straight in my mind.

2 – There are way too many character POVs. The characters kept changing. There were even a couple chapters written from the perspective of very minor characters, simply to present a minor detail that could not be shown from another character’s perspective.

3 – The book had no ending. The story just cut off! It is clear that this is intended to be a series. I read plenty of series and each book is usually a complete story in itself. The next book usually continues with the same characters or tells another story about a minor character from the previous book, that minor character now being a main character in the current book. King’s Folly, however, cannot be read on its own. If you want to know how the story ends, you have no choice but to buy or borrow the next book.

My final complaint is one that is independent of the fantasy genre. This book was published by Bethany House, a Christian publishing company. However, the book is not Christian in the slightest. Other reviewers have written that it is an allegory, but I don’t see it. It’s not like either Narnia (allegory) or LotR (religious themes). Maybe the second book will contain “conversion scenes” that turn this into a Christian story. But King’s Folly (in my view) was not a Christian book. I was disappointed.

Thank you to Bethany House for a free copy of this book in exchange for my honest opinion.

Traces of Guilt – a book review

Yet another great Dee Henderson book! I was excited to read Traces of Guilt because it is about a woman who tries to solve cold cases, those that beg for closure after years of being unresolved. The story was told well, several plot lines woven together to create a very interesting time line. Like all of Henderson’s novels, the writing is fantastic.

Even after all this time, I still have the same complaint about Henderson’s books. All of her characters are too perfect. Sure, they have “flaws.” But the flaws are more like quirks rather than true struggles. All of the struggles are external, man versus environment or man versus man. I really wish I could see more man versus himself (or herself!). I can’t really relate to any of the characters because they don’t struggle with anything real. The occasional character doubts himself, but that’s it. Most are confident, talented, multi-faceted, and everyone loves them!

Even with this complaint, I will continue to read Henderson’s novels as they are published. Why? Great stories!

Thank you to Bethany House for a free copy in exchange for my honest opinion.

I received an email from Goodreads with a summary of the first quarter of 2016. As of March 31, I had already reached 65% of my reading challenge, which is to read 60 books in 2016. I think my goal was a bit too low! When I set the goal, I had no idea that my daughter likes to read constantly. We’ve been doing a good job keeping her in Chinese books and my hope is that someday she’ll be motivated enough to start reading in English. Then the whole library will be open to her.

Last week I finished The Lord of the Rings! The whole family read the series together. My daughter finished first and I finished a few days after her. My husband is still plugging along but he has that pesky thing known as a job, which distracts him from much more important pursuits like reading and playing Animal Crossing. 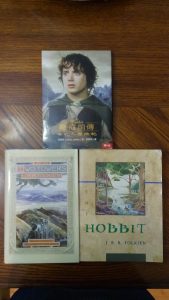 I have tons of thoughts about TLoR but haven’t had any time to write them. Hopefully once we get the taxes sorted and school meetings arranged and caught up on correspondence and…

Next up? No idea. I’m reading some fluffy Christian historical fiction right now. I want to read
The Count of Monte Cristo but my husband wanted to read it with me and isn’t ready to start. I’ll probably finish a couple fluffy books and then dive back into my to-read list.

I love reading challenges. Toward the end of 2015, I seriously contemplated searching for a couple of challenges but never found the time to wade through hundreds of websites. So I created my own!

Here’s what I’m reading this year: 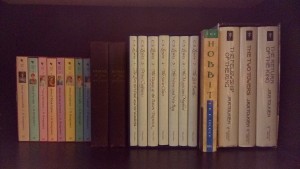 (The brown books are The Count of Monte Cristo).

Fortunately (unfortunately?) I’ve already finished a number of these books in the first two months of the year. So far I have finished:

Frankly, I am shocked that I have already read so many books in just two months. My daughter loves to read so we often read during meals. We visit the library several times per week and will just sit and read. So she and I are both plowing through books. 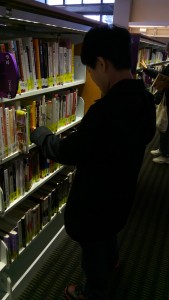 Tonight I’m going to start reading the sixth Narnia book. If I continue reading books as quickly as I have been, I’ll have to add to my 2016 reading list. Jane Austen? Yes!